On 21 May, the Visaginas Urban Lab “Local Stories and Place Identity” took place online, exploring examples on how to strengthen the sense of place with the help of cultural practices. The international seminar-workshop, organized from Visaginas, gathered more than a hundred participants from 10 countries virtually.

In the plenary part of Visaginas Urban Lab, 5 practitioners from 3 countries of the Baltic Sea region shared their experience: Auksė Petrulienė (Kaunas, Lithuania), Grėtė Kaulinytė (Utena, Lithuania), Roman Sebastyański (Gdansk, Poland), Felix Hawran and Armin Hottmann (Berlin, Germany). In order to broaden the horizons, Sara Agić, a representative of Novo Naselje, a neighborhood of the city of Novi Sad (Serbia), was also invited to join the event. All speakers work directly with local communities, following a bottom-up approach and using culture as a tool to revitalize neighborhoods and strengthen local identities.

Visaginas Urban Lab was also an opportunity to present the changing cultural field of Visaginas. The broadcast began with a 15-minute interview with 5 creators from Visaginas: Sandra Matvejeva, Ksenija Salimdzhanova, Vladimir Ionov, Olga Mazniova, Nadia Kapusta. They all look back at the local past, searching for inspiration for the present and the future. Their initiatives use creative expressions to strengthen local place identity.

Participants were invited to take a look at 3 places important to Visaginas: INPP control panel simulator, Visaginas acrobatics school and art residency “Point”. The excursions were led by Anastasija Jevtiuchova, Aleksej Urazov, Viktor Kalinin and Jūratė Leinartaitė. They talked not only about the history of the places, but also shared future prospects. 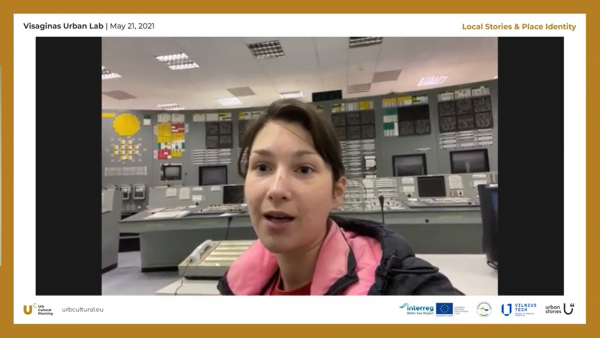 The Visaginas Urban Lab was diversified by video inserts – five short fragments depicting the city’s architecture, nature, art, nuclear heritage and traces of the past. Watch the plenary presentations and video broadcasts HERE!

Visaginas Urban Lab was organized by the NGO “Urban Stories” together with the Faculty of Creative Industries of Vilnius Gediminas Technical University. The event is one of the Cultural Planning Laboratories organized in the Baltic Sea Region as part of the Urban Cultural Planning project.